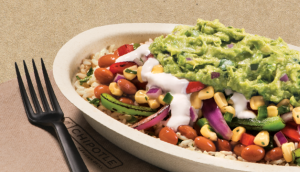 If you’re not familiar with Chipotle Mexican Grill often known simply as Chipotle, is an American chain of fast casual restaurants in the United States, United Kingdom, Canada,Germany, and France, specializing in tacos and Mission-style burritos. Its name derives from chipotle, the Nahuatl name for a smoked and dried jalapeño chili pepper. The fast casual company trades on the New York Stock Exchange under the ticker symbol CMG.

Chipotle is one of the first chains of fast casual dining establishments. Chipotle’s menu consists of five items: burritos, bowls, tacos, quesadillas, and salads. The price of each item is based on the choice of chicken, pork carnitas, barbacoa, steak, tofu-based “sofritas”, or vegetarian (with guacamole, which would be at an extra charge otherwise). Additional optional toppings are offered free of charge, including: rice, beans, four types of salsa, sour cream, cheese, and lettuce

Talk To Us! Your Feedback Is Welcome Here!

This site uses Akismet to reduce spam. Learn how your comment data is processed.