Lennar Homes has filed plans with Pasco County to build 402 new single family homes and town homes at Mitchell Ranch, on the corner of State Road 54 and Little Road.

Lennar is also building homes in the nearby community of Starkey Ranch.

Lennar Corporation is a home construction and real estate company based in Miami, Florida. In 2017 the company was the largest home construction company in the United States after its purchase of CalAtlantic Homes. The company is ranked 230th on the Fortune 500 as of 2018. The company operates in 21 states and owns Rialto Capital Management, the sponsor of six private equity funds that invest in real estate and an originator commercial mortgage loans for securitization. The company also developed and retains ownership interests in 53 apartment communities.

We’ve provided a link to the plans submitted to Pasco County here. 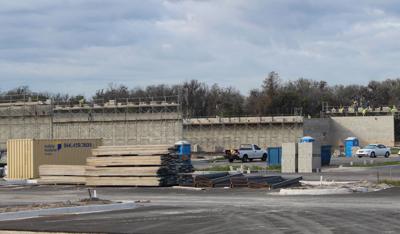 MICHELE MILLER | Times Construction has begun on the Village at Mitchell Ranch at the southwest corner of State Road 54 and Little Road.

TRINITY — New Jersey-based M&M Realty Partners has a contract to develop the remaining 300 acres of the Mitchell 54 West project at State Road 54 and Little Road.

Land owner Dewey Mitchell shared the information July 11 with a North Tampa Bay Chamber luncheon crowd of 58 people at the Fox Hollow Golf Club in Trinity. Mitchell also offered an enticing tidbit about what might be in the works: A food hall and market place similar to Armature Works in Tampa.

Armature Works is a mixed-use project in Tampa Heights in a historic building that served as the storage facility for Tampa Electric’s street cars. It includes shared work space and meeting rooms and its centerpiece is the 22,000-square-foot Heights Public Market where communal seating is surrounded by 15 food locations.

M&M did not respond to an e-mail seeking comment. The company developed the Market Place at Citrus Park, a 200,000-square-foot project that includes Costco, Aldi, and Ford’s Garage on West Linebaugh Avenue in Tampa.

The company’s web site also hints at more projects coming to the state by noting the ongoing construction of a 50,000-square-foot Boynton Beach Market Place, “one of M&M’s newest projects in Florida, but because of the partners’ aggressive outlook on this state, it will soon be one of many.’’

The 300 acres in Pasco County would be the second phase of the Mitchell project, planned as a 330-acre, mixed-use project of up to 800 homes and nearly 1 million square feet of commercial space. First announced four years ago, the project initially was planned to include an outdoor mall, movie theater, fitness center, offices and public gathering space within walking distance of the residential neighborhood. It’s a design concept referred to as a town center or lifestyle center.

The 30-acre first phase of the Mitchell project, known as the Village at Mitchell Ranch, is under construction.

VMR Development of Alabama acquired that parcel in May for $8.5 million. VMR is a newly formed company that includes the principals of Blackwater Resources of Birmingham, Ala. Blackwater previously developed the Mitchell Ranch shopping plaza on the southeast corner of the intersection.

Sprouts Farmers Market already announced it will be one of the anchors in the Village at Mitchell Ranch. Mitchell distributed maps to the audience that identified other tenants as HomeGoods, Mattress One, Michael’s, Ulta Beauty, PDQ, Chipotle Mexican Grill, Five Below and Skechers.

But the idea of M&M considering an Armature Works-like project for Trinity generated the most buzz.

“I loved hearing that,’’ said financial planner and former Pasco Commissioner Michael Cox, who introduced Mitchell to the audience.

“I think it’s fantastic,’’ said Hope Allen, president and CEO of the North Tampa Bay Chamber. “I think it’s absolutely a necessity. The 54 corridor is a great place for it.’’

She noted the collaborative work space could benefit entrepreneurs, while the food offerings “gives us added culinary options, outside of big box, chain restaurants.’’

Mitchell said the 300-acre second phase could break ground in October or November if the sales contract closes in the fall.

Pasco County will be getting its first Sprouts Farmers Market, the organic grocery chain announced Wednesday.

The new store will open at the Village at Mitchell Ranch on State Road 54 and Little Road. Officials with the specialty store did not say when the store will open to shoppers.